The essence of free-flight is that the aircraft have no need for external control, for instance by radio. Aircraft of this type have been flown for over two centuries. They are designed to be inherently stable in flight; if disturbed by a gust of wind or a thermal current they will return automatically to stable flight. For this reason most free flight aircraft are not replicas of man-carrying ones, for they are designed for a quite different purpose. Their stability is achieved by a combination of design and trim, - the relationship between centre of gravity, wing and tailplane incidence and rudder setting.

With their much lower wing loading, free-flight aircraft fly much slower than the engine-powered radio-controlled aircraft that many people first think of when ‘model aircraft’ are mentioned. Most of them glide at little more than walking pace and few weigh more than 500 grams.

Usually the sole object in free-flight is flight duration, and one of the sport’s fascinations and challenges is to design the most efficient aircraft within the various competition limits on such parameters as minimum weight, maximum wing area and motive power. It is solely a stopwatch, rather than any judge’s opinion, that decides the result.

Free flight models may be broadly divided into four categories

When flown competitively, the usual aim is maximum flight duration. In the case of models flown outdoors, the modeller attempts to launch the model into a rising column of air, a thermal. These outdoor free flight models tend to be designed for two very different flying modes: climbing rapidly under power or tow, and gliding slowly while circling with minimum sink rate. Much of the challenge in designing and flying these models is to maintain aerodynamic stability in both modes and to make a smooth transition between them. Modern models use mechanical or electronic timers to move control surfaces at pre-set times. Detecting the thermal into which to launch is vital and can involve several methods, ranging from radio telemetered temperature and wind speed measurements plotted on a chart recorder to Mylar streamers or soap bubbles to visualize the rising air.

Because competitions normally involve up to seven rounds during the day, each is flown to a maximum flight time hard to achieve without thermal assistance; an automatic on-board time switch upsets the trim of the aircraft when the "max" is achieved, to bring the aircraft down safely and quickly. Locating and recovering the aircraft for further flights is an important part of free-flight. Many aircraft carry radio location beacons, and flyers will use GPS, binoculars, a compass and a directionally sensitive radio tracking receiver to assist them. A day's flying and retrieval may well involve 20 miles (32 km) or so on foot or on bike, depending on wind strength.

Models flown indoors do not depend on rising air currents, but they must be designed for maximum flight efficiency, because of the limited energy stored in the rubber or electric power source.

Within each category, there are different classes. The FAI is the international organising body for all air sports worldwide, including aeromodelling and it sanctions World and European Championships. Typically, there is a Fédération Aéronautique Internationale (FAI) world-championship class, a so-called Mini class, an Open class, and possibly any number of national or unofficial classes, for which regional or national competitions may be held. Within the competition classification codes specified by the FAI, free flight aeromodeling gets the generic code of F1, where the "F" stands for flying model aircraft in general, with the "1" standing specifically for free flight models.

Gliders have no on-board motive power. The only energy inputs are from the flyer at the launch, and rising air encountered during the flight. During launch many gliders withstand 30G or more, far more than any manned aircraft is stressed to and launch speeds of sometimes over 140 km/h, which energy is then converted into altitude; this has only become possible since the advent of composite materials such as carbon (graphite), fiberglass, and Kevlar, which are used extensively in many of their structures.

The FAI glider class is F1A, also known as A/2 or Nordic glider. The model must have a projected area (wing and stabilizer) of between 32-34 dm2, and a minimum weight of 410 g. Launch is by hand tow, using a cable of 50 m length. The small glider class is A/1 (F1H). A/1 gliders must have less than 18 dm2 total area, and weigh at least 220 g. Open glider contests are rarely flown, and most competitors in such contests use F1A gliders. Other glider classes include magnet-steered (F1E) gliders - essentially a free flight slope soaring class, and hand-launched glider (usually abbreviated HLG, and also widely known as simply chuck glider). HLGs are small models which are launched from level ground simply by being thrown hard. This is one of the more athletic of the free flight disciplines. 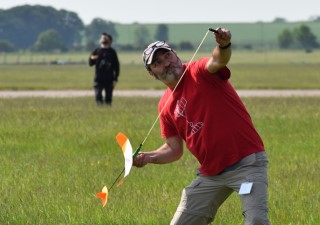 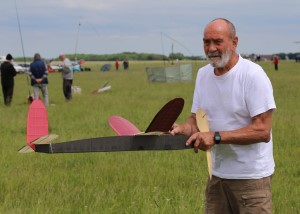 Rubber-powered models are powered by the stored energy of a twisted elastic material. These range from the simple rubber-band powered toys available in many toy stores, up to the Open rubber class, examples of which often use 200 g of rubber in their "motor". Rubber does not produce a constant power output; when fully wound a rubber motor produces its maximum torque, but this drops rapidly at first before 'plateau-ing', finally declining again, after which the propeller stops. Using this initial burst efficiently is vital and automatically variable pitch propellers help here, together with timer-operated changes of wing and tailplane incidence and of rudder setting. At the end of the power run the blades fold back alongside the fuselage to minimise drag during the glide.

The FAI rubber class is F1B, also known as Wakefield. (The Wakefield Trophy, the oldest in model flying, was donated by Lord Wakefield of Hythe, founder of Castrol Oils, in 1928). F1B models may have a maximum of 30 g of rubber motor, and the empty weight of the airframe must be at least 200 g. The maximum total area of the model must be less than 19 dm2. The small rubber class is Coupe d'Hiver (also known as F1G). "Coupe" models have no area restrictions. The maximum weight of rubber allowed is 10 g, and the minimum empty weight of the airframe is 70g. . Open rubber is a popular event, featuring large models with enormous amounts of rubber crammed into them. Open models often have 50% of their flying weight composed of rubber.

The most well known rubber powered model is the BMFA Dart (also known in the USA as the "AMA Delta Dart"). They are commonly used in workshops or for beginners to learn about construction and flying.

Power models are those with an on-board power source which is not a rubber motor. Frequently this is an internal combustion engine, and the engine run is limited, typically to just five seconds. Designing an aircraft which climbs as high as possible, with minimum drag at a low lift coefficient, but then must convert to a slow flying glider, is a challenge unique in aviation. However, the category also includes compressed gas motors and electric power. The FAI power class is F1C. F1C models are equipped with an internal combustion engine of up to 2.5cc and need to weight at least 300 g per 1cc (i.e. minimum weight of a 2.5cc equipped model is 750 g). These engines are usually custom made for optimal power output and often yield well over 1 bhp (0.75 kW) at more than 30,000 RPM. Many F1C models feature folding wings, and sometimes a variable camber airfoil via flaps, to minimize the aerodynamic drag during the climb phase. The small FAI power class is F1J, with an engine capacity limit of 1 cc.

Another type of powered free flight models is CO2 (its FAI category is F1K ). These models fly using a small engine powered by carbon dioxide. These models are very light. The amount of CO2 is limited to 2 cm³, which is enough for approximately 2 minutes of flight. 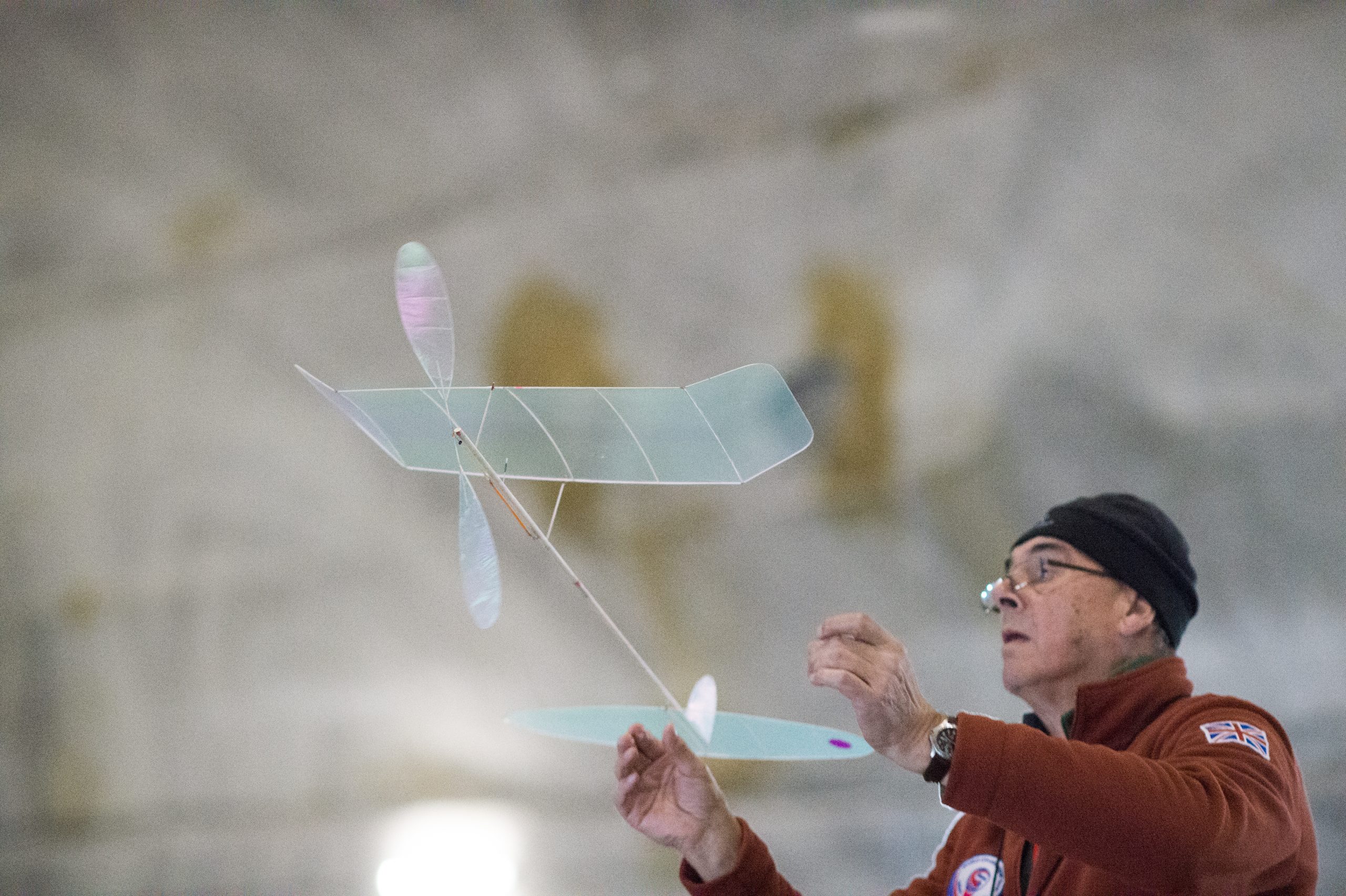 These models are typically very light in weight because they do not have to withstand external weather conditions. There are a number of classes of indoor free flight models. Some are scale reproductions but others are designed purely to fly for as long as possible. These models are timed with a stopwatch.

The ultimate indoor duration class is designated F1D. F1D models must have a minimum weight of 1.2 grams and a maximum wing span of 55 cm. These models are constructed from very light balsawood sheet and strip, boron filament, carbon fibre, and a transparent covering of plastic film less than 0.5 micrometres thick. The models are powered by 0.6 grams of rubber in a single loop about 9.0 inches long that can be wound to take around 1500 turns. The average propeller RPM during a flight is less than 50 and these models fly at less than walking pace. F1D models require a large space, such as a sports hall, aircraft or dirigible hangar; there is even a salt mine in Romania 400 feet (120 m) underground that has hosted the FAI world F1D championships several times. Single flight times approach forty minutes.

Although most other indoor model aircraft are also rubber-powered, gliders and aircraft powered by compressed gas or electric batteries are also flown indoors. Some classes concentrate on scale or semi-scale replicas of man-carrying aircraft. Others feature unusual flight configurations, such as ornithopters, helicopters or autogiros.