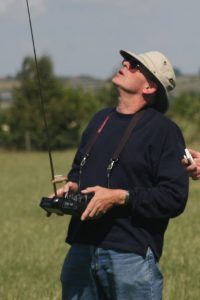 Mike was a talented flyer, builder and organiser.  His flying and building started like many of his generation in the late 50’s early 60’s honing his skills on Free Flight models of all descriptions.

Mike moved to York, and trained as a Teacher, becoming Head of Craftwork at a local school. No doubt the Students found that many of their projects were aircraft based!  Mike’s organisational skills were soon recognised, when in 1981 he became a member of the UK team attending the F3B World Championships in Sacramento, USA.

Two years later, Mike once again found himself on the UK Team but this time as one of the organisers for the next F3B World Championships to be held in his home town of York. Classed as one of the best ever organised events, the FAI issued a “Diplome d’Honneur” in recognition of the fact.

Not to rest on his laurels, Mike headed the organisation of the 2004 F5B World Championships again in York.

Mike was the Silent Flight Technical Committee Secretary for many years until his retirement in 2021. He was awarded the Fellow of the BMFA in 1999 for his work in developing and promoting a newly established eSoaring Class of Thermal Gliders in the UK, and worked tirelessly with CIAM, the Aero modelling arm of the FAI, to develop the class, now known as F5J, to gain World Championship status.

Not forgetting Mikes flying skills, amongst his many successes was a fitting win of the 2012 European F5J Championship in Slovakia.

He leaves his wife Ann, and his two sons, David and Richard. Our sincere condolences go out to them all.